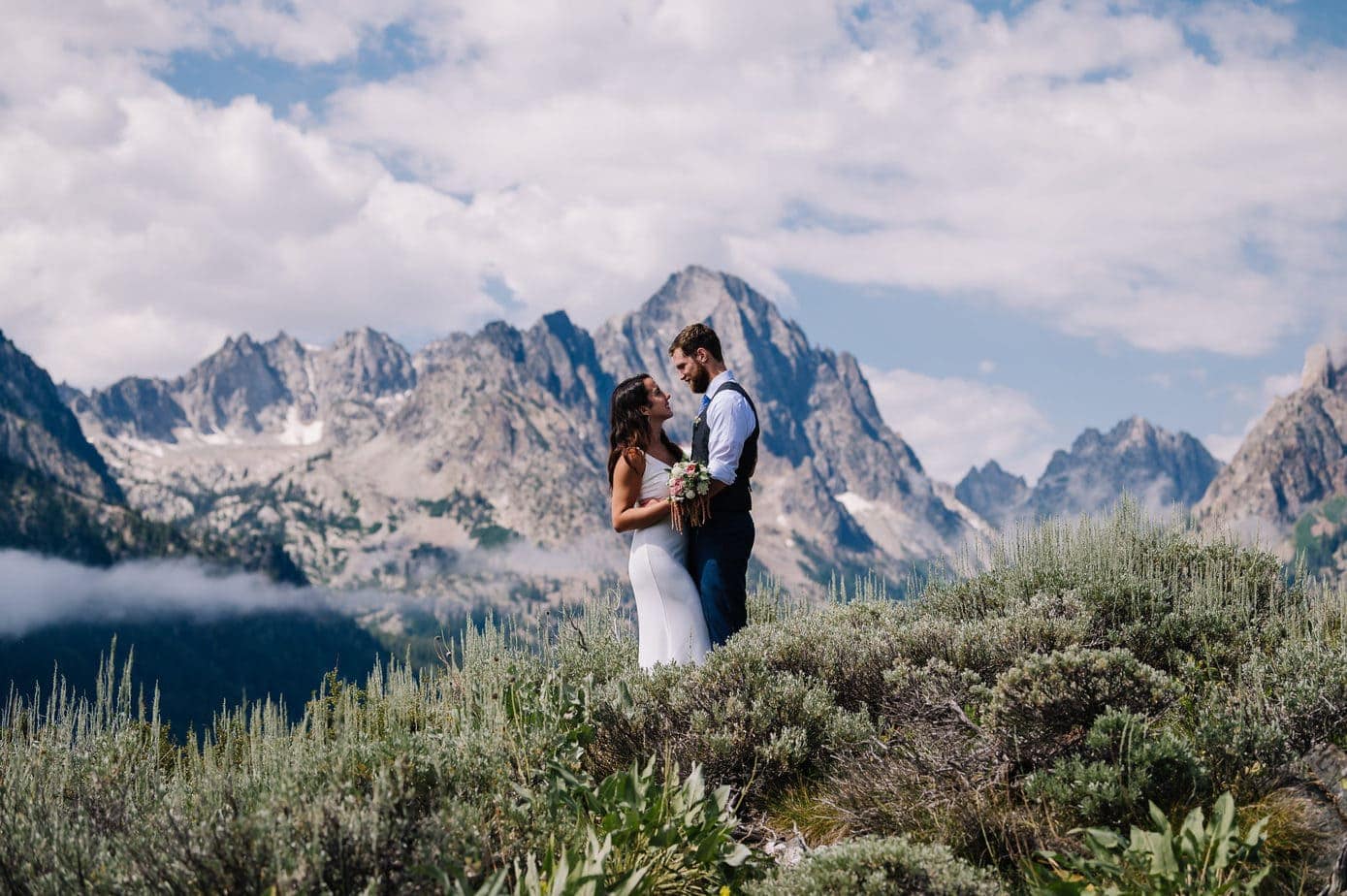 The images in this blogpost are a culmination of nothing going according to plan.

Izzy and Cody had to cancel their elopement in Alaska due to COVID. They sat down and picked 3 states they wanted to see and Idaho was at the top of the list. They reached out to me 2 weeks before they wanted to elope and we started planning their day.

An hour before their Sawtooth Mountain elopement ceremony an intense summer thunderstorm set in and we decided to postpone to sunrise the next morning. Sunrise came covered in a thick fog. After an hour of waiting for it to lift off the mountains, with no avail, they were married with a cloud covered background. 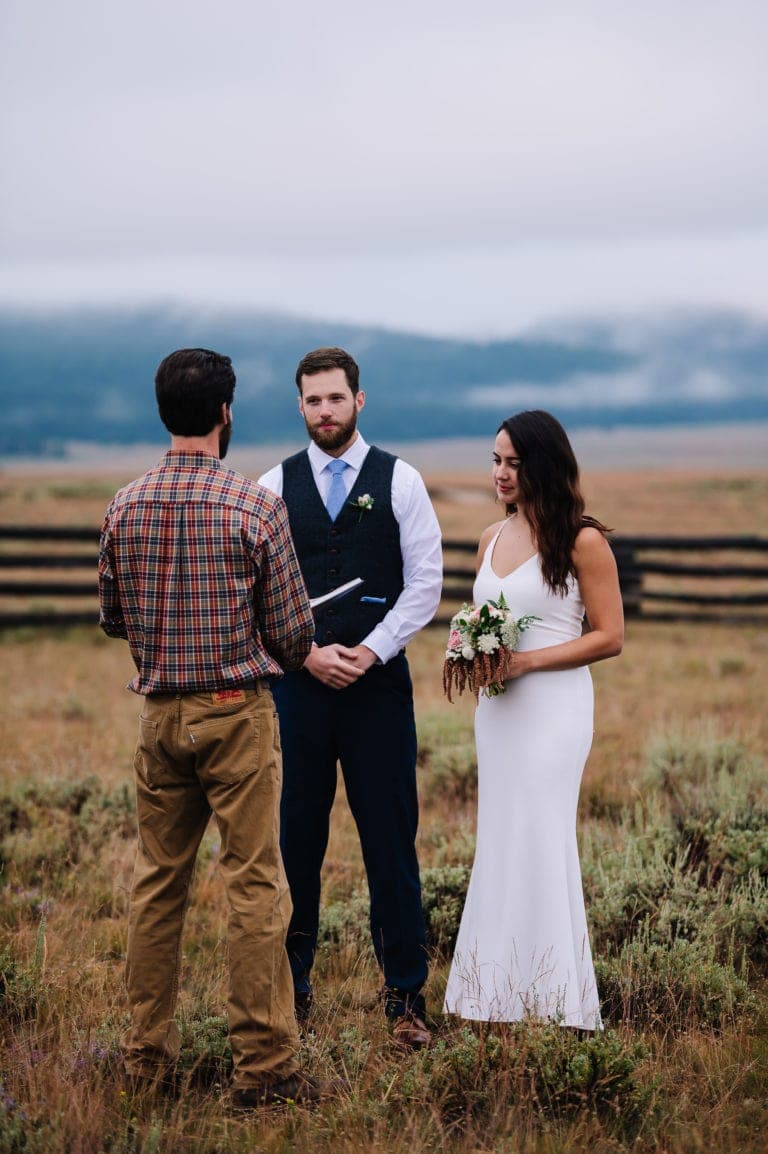 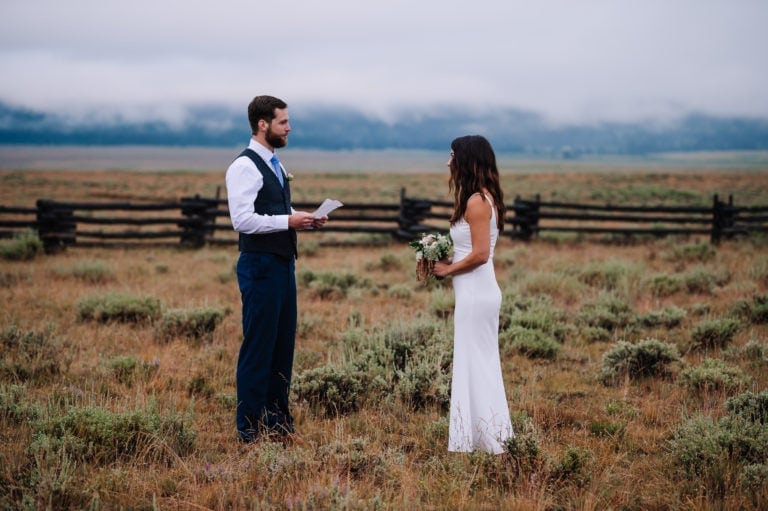 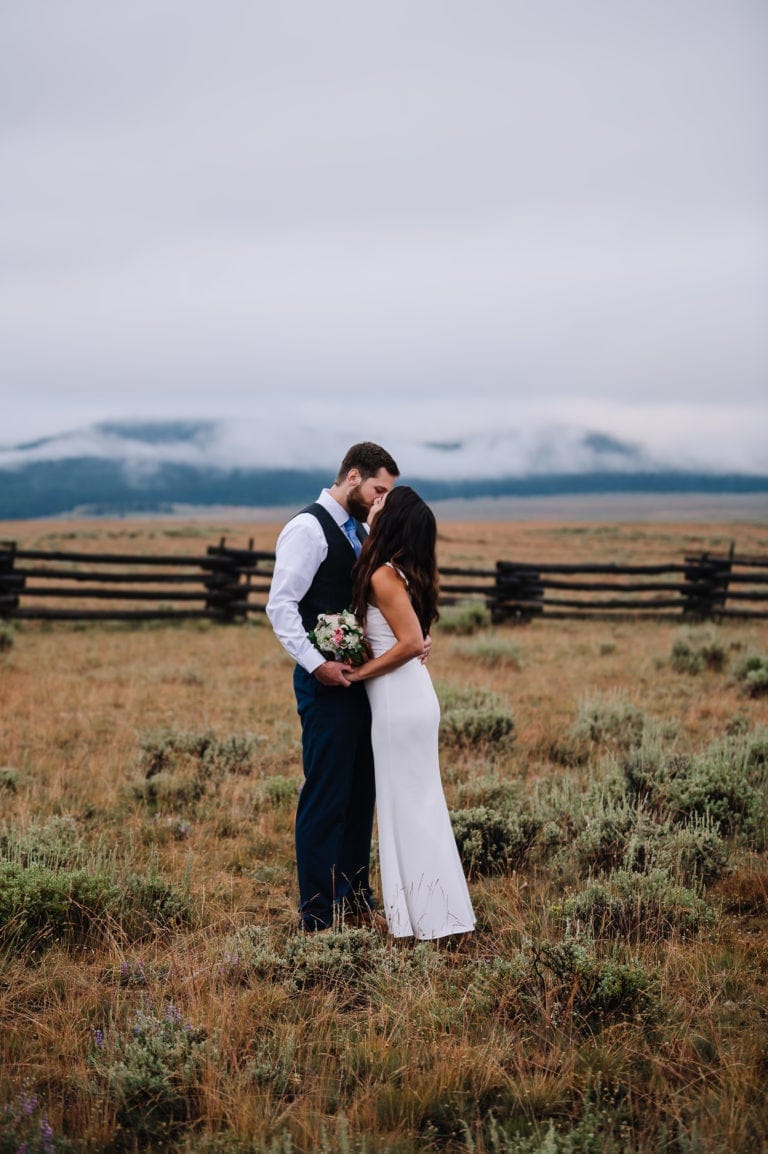 Hiking into the Sawtooth Mountains

We had a short hike planned for after the ceremony but with the fog it left like we had time on our side for a longer hike. I suggested hiking to this ridge in the Sawtooth Mountains, they were game and we hit the trail after breakfast.

We reached the ridge at 9am. The fog was so thick you could almost taste it and it felt like we were standing in the clouds. I thought the fog would burn off by 10am but it didn’t start to budge until almost 11am. I am eternally grateful for couples that trust me because it took trust for Izzy and Cody to hangout in the fog for two hours with me. I just kept saying there is a breathtaking view on the other side of all this! 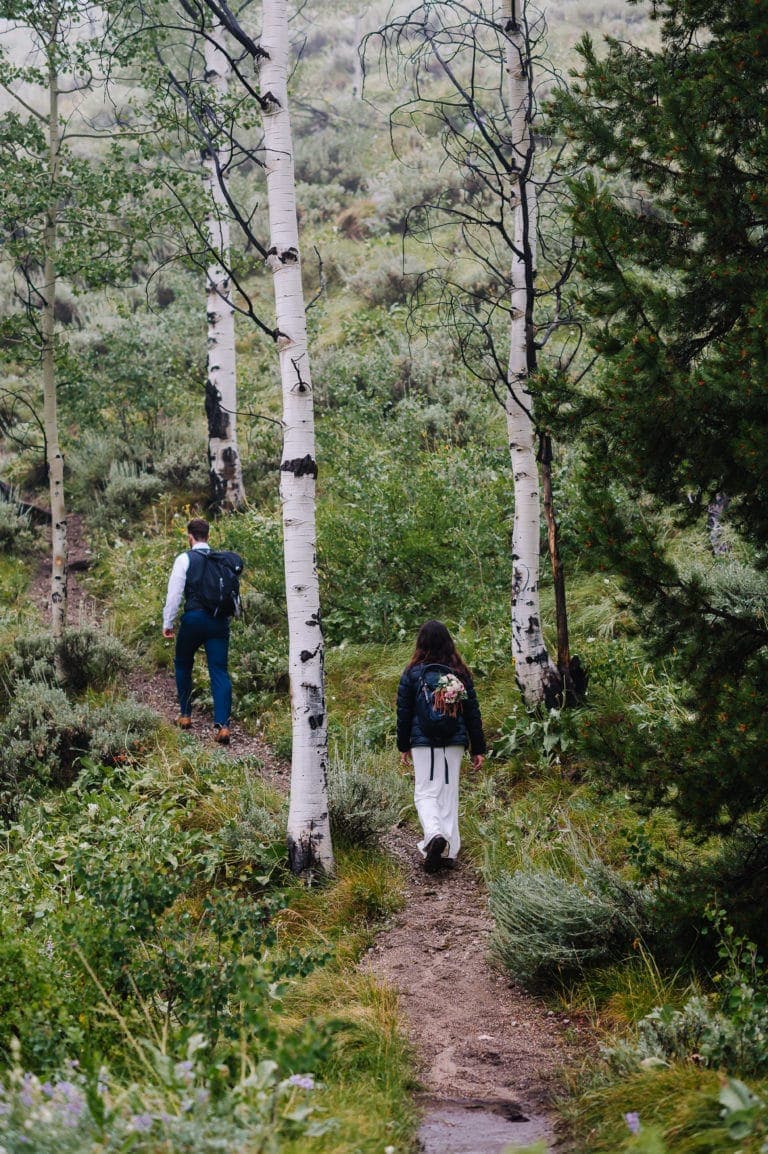 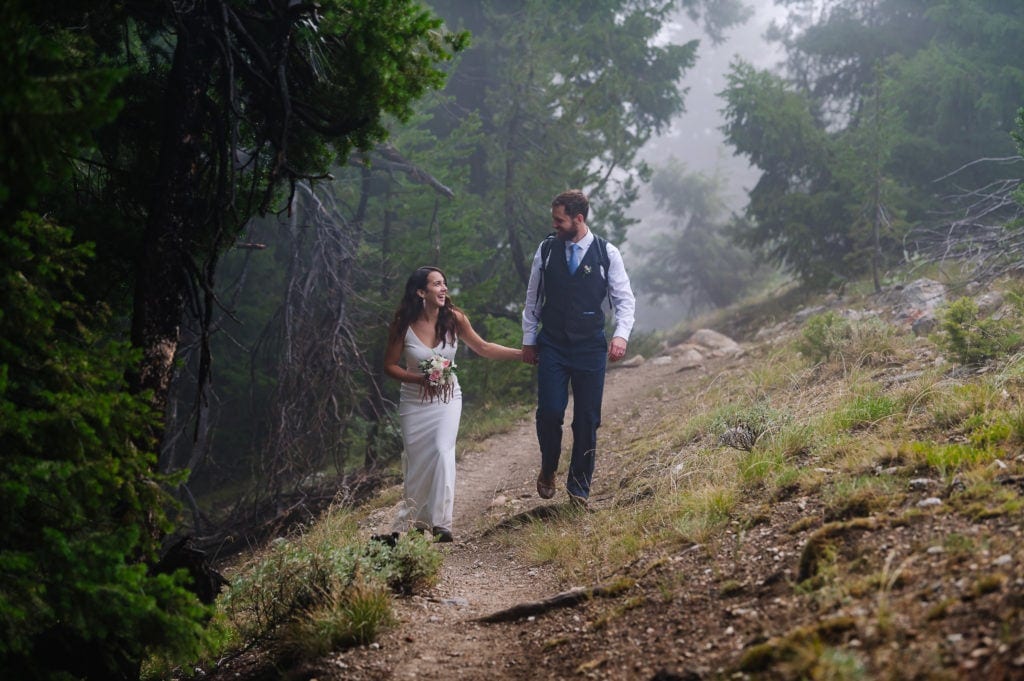 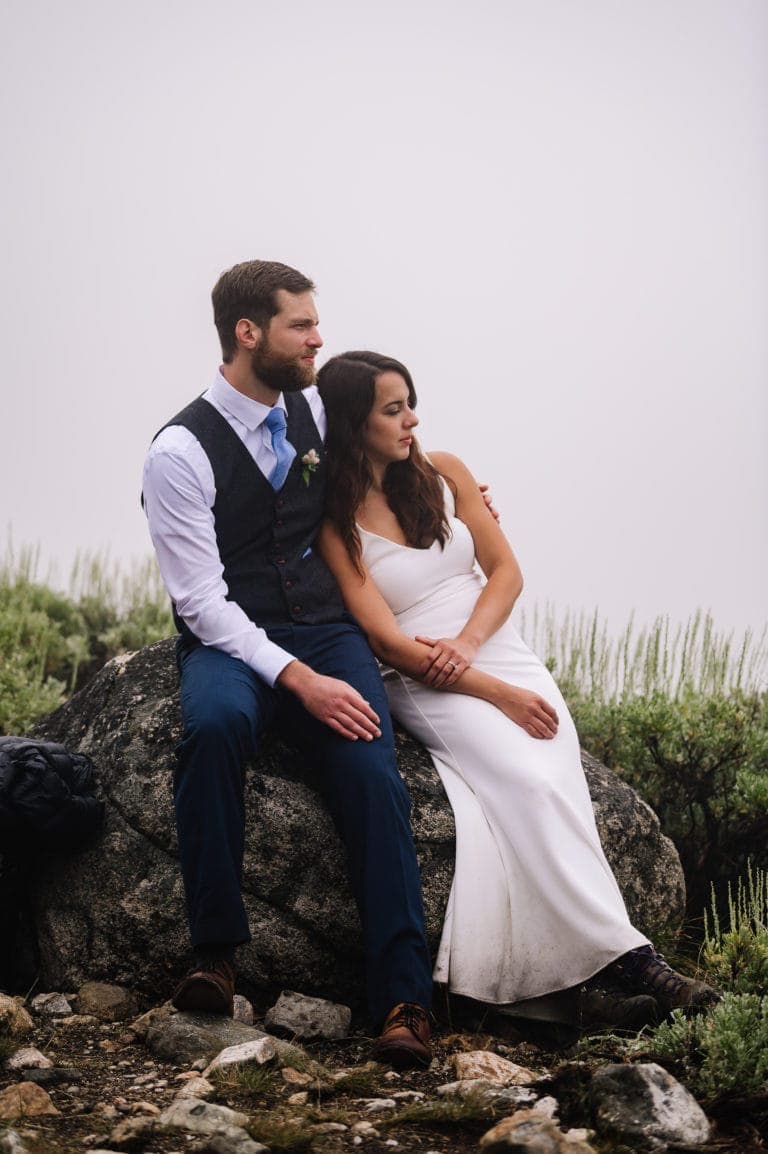 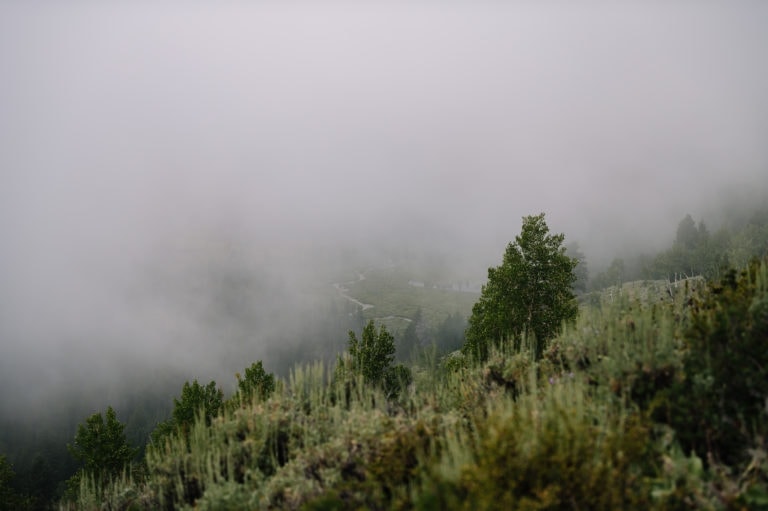 And the Sawtooth Mountains appeared!

Watching the fog break was such a beautiful experience. The mountains would appear and then disappear. The breeze was cool and I could feel the peaceful love these two share. The bigger plan for their elopement day unfolded exactly how it was intended too and it was simply perfect! 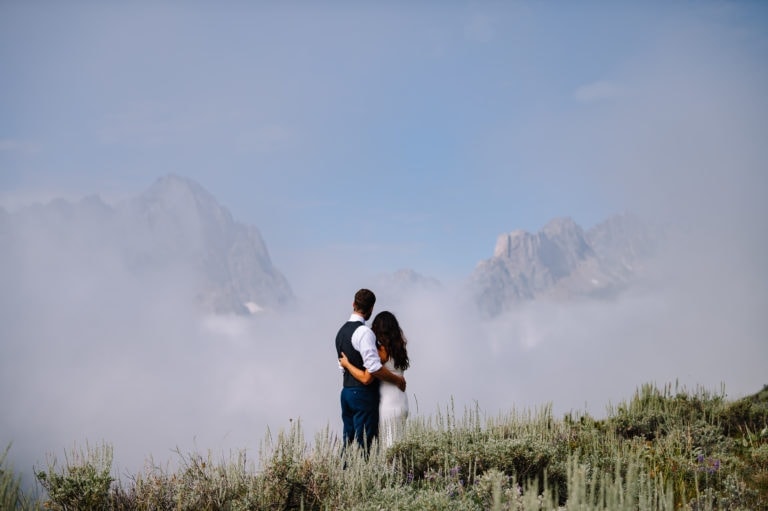 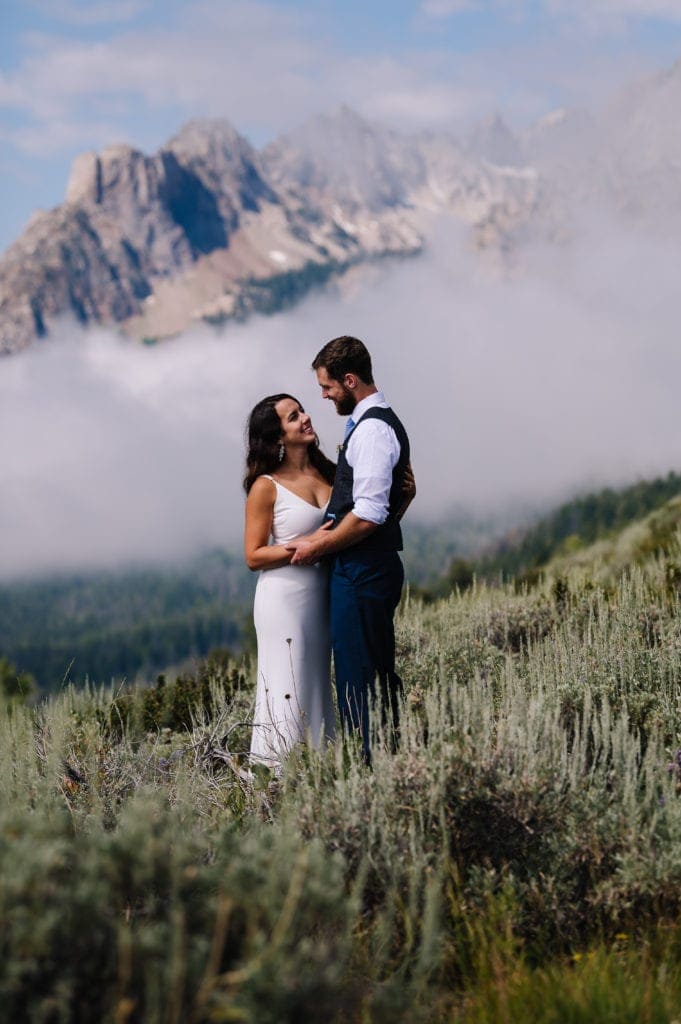 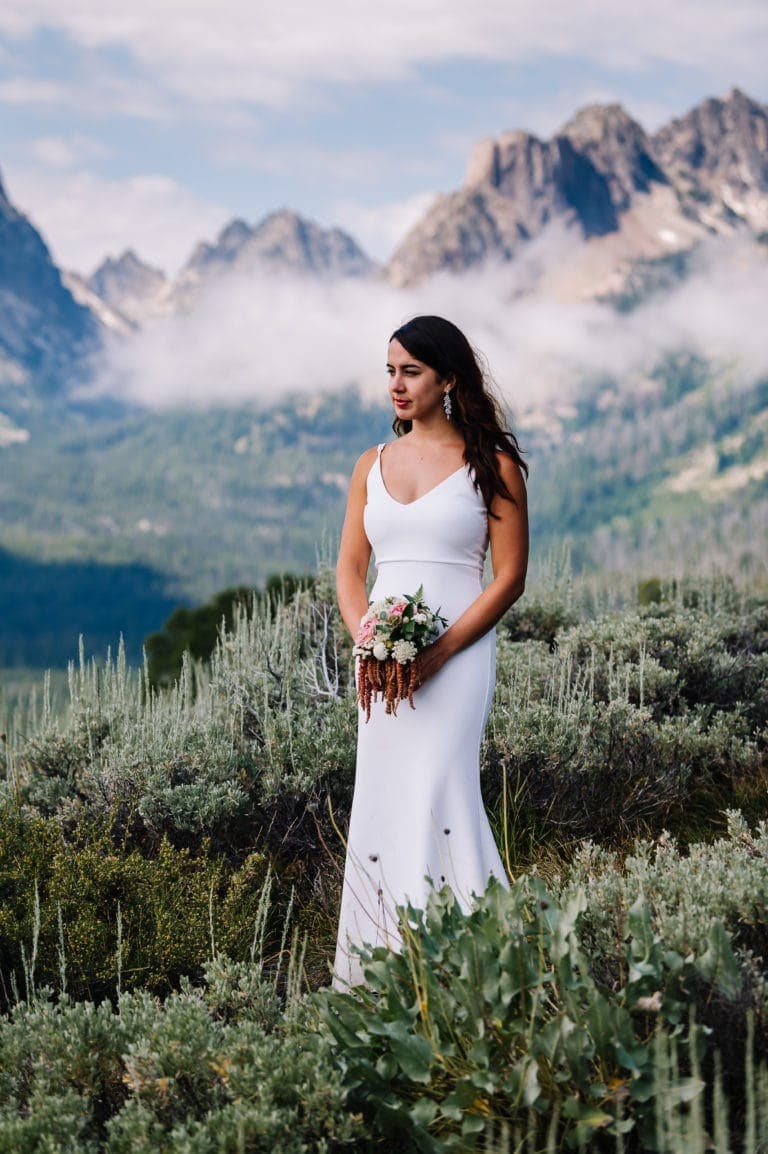 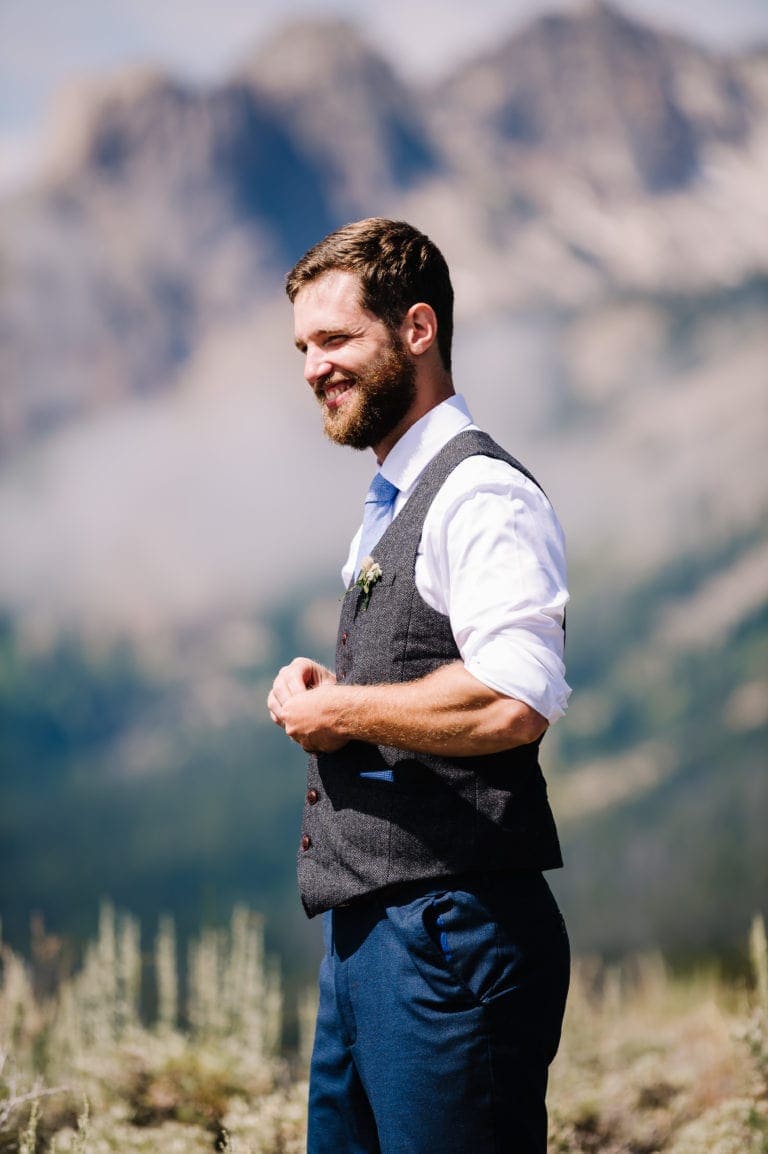 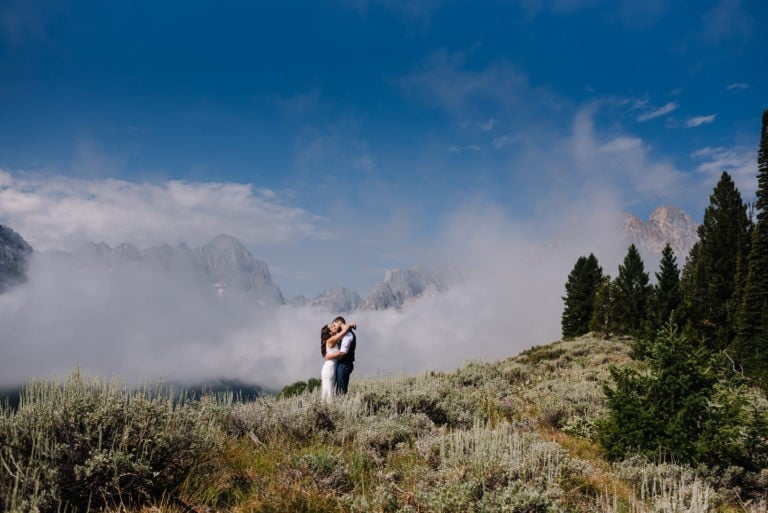 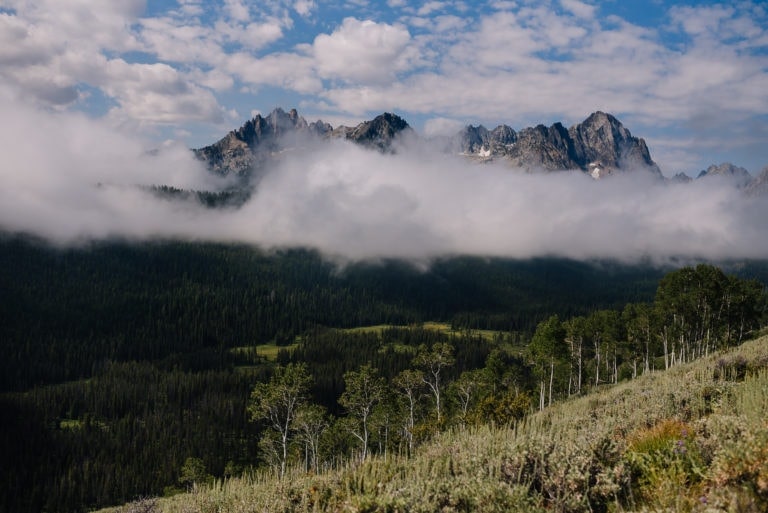 This was our view on the hike out! I don’t think it gets any better than this!

If you’re looking for a Stanley elopement photographer to help make your elopement epic, I would love to chat with you!​

Reach out today to schedule a free, no-obligation consult.

Let’s Chat About Your Elopement 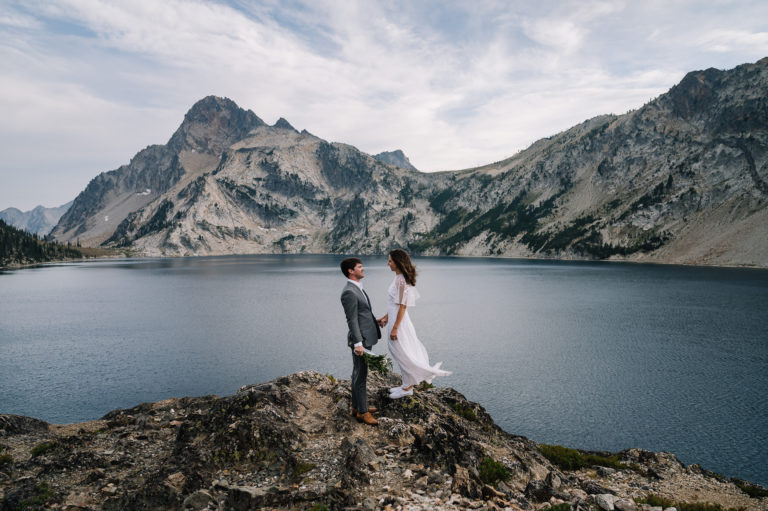 This Idaho wedding was a day full of adventure, laughter, happy tears, and epic views of the Sawtooth mountains! If you are looking for inspiration for your elopement adventure then you are in the right place.

Sandy and Justin created an unforgettable Redfish Lake Wedding that included a beautiful reception space, unexpected showers, and a furry four legged friend. S & J’s elopement started with a private hiking adventure and then transitioned to a ceremony and reception with family and friends. 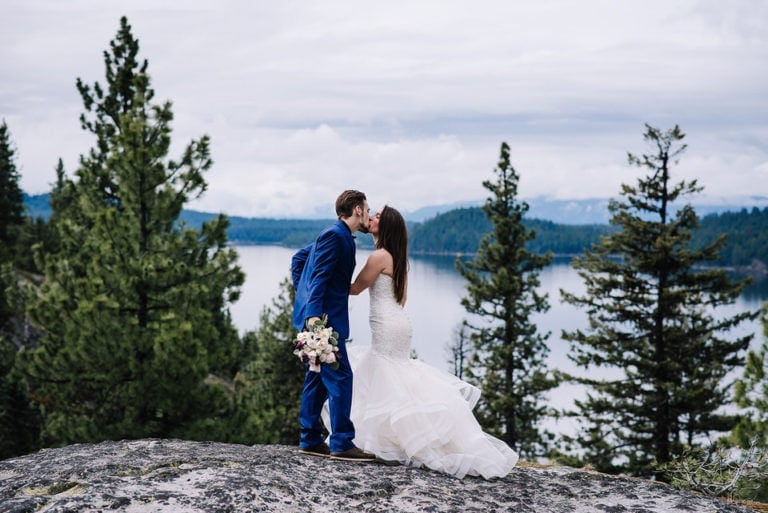 Every detail of Michaela and Davids wedding at Moonridge Cabin in McCall, Idaho was intentional and a representation of their love and what they valued. They incorporated vows to Davids son Orion in their ceremony, burnt sage to purify the energy around them before promising to love and honor each other and performed an AcroYoga routine for their first dance. The day after their wedding they went adventuring on Payette Lake and spent the morning hiking and exploring the area. 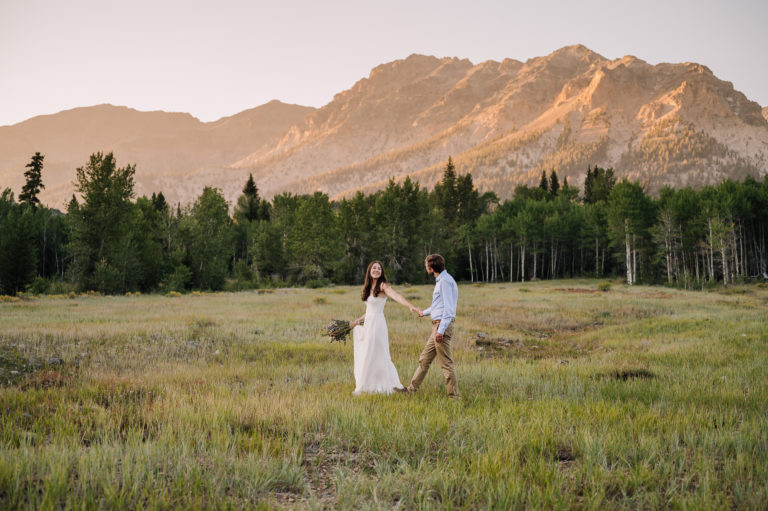 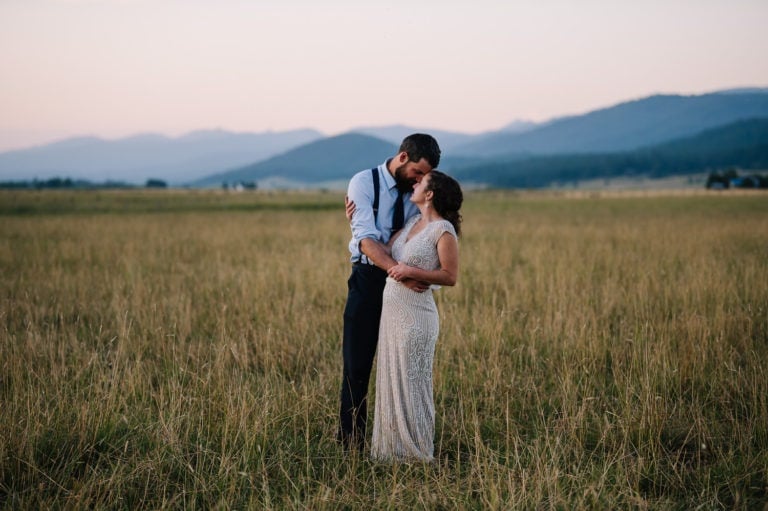 Micah and Ben’s McCall Idaho wedding day began at 4am. They designed their wedding day around spending a few hours together at sunrise. We hiked to a lookout point on Payette Lake in McCall, Idaho for their first look and couple photos. Micah and Ben planned a beautiful evening reception for their wedding guests at the Historic Roseberry Barn. 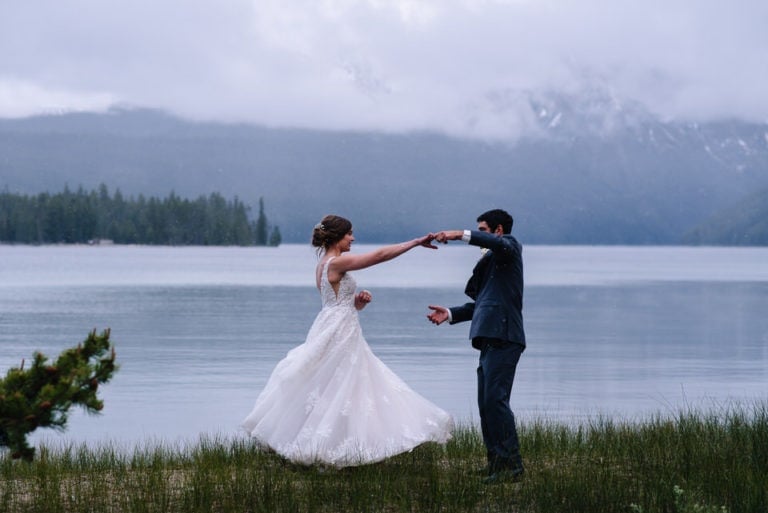 This epic Redfish Lake Lodge wedding in Stanley, Idaho is full of snow and love. It was featured by Rocky Mountain Bride in September and is a mix of local vendors and amazing mountain vibes. Alison and Clay chose a destination wedding at Redfish Lake Lodge because they wanted to share the Sawtooth Mountains with their friends and family.